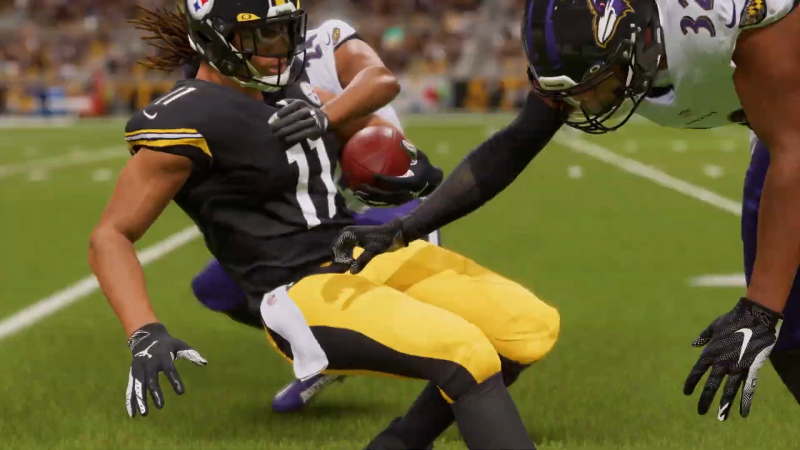 Madden NFL 23 is coming in August with some new tech set to change the game entirely on both sides of the ball. Our own Brian Shea recently went hands-on with the latest version of Madden and its game-changing feature FieldSense, which encompasses a variety of changes to gameplay and animations. You can check out a deep dive into everything FieldSense offers in the video above.

FieldSense, which is exclusive to the newest generation of consoles (PS5 and Xbox Series X/S), has a few different aspects that are covered in the video by senior game design director for Madden NFL 23, Connor Dougan. First is a set of new physics-informed animation as well as animation branching technology that brings a more realistic look to the action on the field. New gameplay techniques like 360 Cuts introduce more control for receivers and running backs, while Hit Everything is a feature that affects just about everything on the defensive side of the ball. For Quarterbacks, Skill Based Passing will let players fine-tune where they’re throwing the ball for more precise passes that can be kept away from pass defenders. There are demonstrations of those new concepts and more in the almost five-minute breakdown.

Madden NFL 23 lands on August 19 this year with the man himself, John Madden, gracing the cover. While FieldSense is only available on PlayStation 5 and Xbox Series X/S, other versions of the game are also coming to PlayStation 4, Xbox One, and PC.

Next Article No. Power Punch II wasn’t going to be a sequel to Punch-Out!!

Capcom has revealed that Juri will join the roster of Street Fighter 6 alongside newcomer Kimberly. Returning competitor Juri is a “sadistic thrill seeker who […]

New Retro FPS Is The GoldenEye 64 Sequel You Always Wanted

Although rumors have recently been inescapable that a remaster of Rare’s landmark N64 shooter, GoldenEye 007, is coming soon, as of yet there’s been no […]