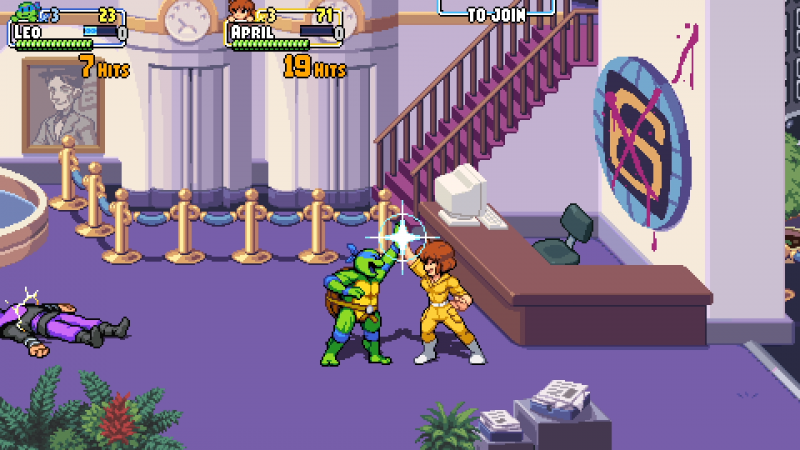 Teenage Mutant Ninja Turtles carved its perfect niche in video games by way of the cooperative beat ‘em up. Titles like the 1989 arcade game and Turtles in Time let fans fulfill the fantasy of kicking shell alongside their friends, but it’s been a long time since our green heroes were the stars of a great video game. Shredder’s Revenge ends that drought, serving as a lovingly crafted homage to TMNT’s glory days that gives fans what they remember while sanding down most of the rough edges.

Shredder and his Foot Clan have run amok in New York City and beyond, and it’s up to the Turtles, alongside Master Splinter, April O’Neil, and an unlockable Casey Jones, to stop them. Up to six players team up to brawl their way through over a dozen colorful, detailed stages in an adventure inspired by the classic 1987 cartoon. Although Shredder’s Revenge can appeal to any generation of TMNT fans, those who grew up in the ‘80s and early ‘90s will best appreciate how Tribute Games’ reverence for that series oozes from every pixelated brick.

I’m among the fans who discovered TMNT during this golden era, so I couldn’t stop smiling as I recognized Easter eggs and encountered a fearsome foe or friendly face I’d long forgotten about. The cuts run deep in Shredder’s Revenge – one villain only appeared once in the cartoon – giving diehard players plenty of well-executed fanservice. Hearing the original voice cast bring the Turtles to life adds a nostalgic cherry atop the package and a wonderful retro-inspired soundtrack ranks among my favorites of the year.

Shredder’s Revenge doesn’t try to reinvent the beat ‘em up. Rather, Tribute Games refined the old-school template. You still largely mash the same attack button to execute simple combos, but chaining together aerial, running, and various special attacks provides enough depth to keep it from feeling completely one-note. I especially love using the dodge/recovery button to sidestep attacks, bypass defenses, or instantly get back in the fray when knocked down. Sending foes careening into the screen border, air-juggling them long after they’re defeated, and tossing them at the screen adds more layers of goofy fun. However, battling flying enemies is less enjoyable because it’s tougher to discern which plane they occupy. Missing multiple jump kicks only to get blasted in response irked me like no tomorrow.

Even with a full squad of six players and mobs of enemies on screen, Shredder’s Revenge runs like a dream. Any semblance of strategy goes out the window with a half-dozen friends swinging ninja weapons at once, but that provides its own chaotic brand of entertainment. Sure, losing track of yourself in the sea of digital humanity happens often and can be mildly frustrating, but the joy of laughing and cheering alongside so many buddies dulls that irritation.

Each character sports individual traits, such as reach, attack, and speed, that differentiate them enough without making one feel better than the other. For example, Leonardo is the all-rounder, Donatello has the longest reach, Raphael and Splinter hit hardest, while Michelangelo and April move fastest, with variations between. You can’t go wrong even if someone claims your favorite. Though I’ll always rep Donatello, I had a great time using everyone.

In addition to a standard Arcade mode, a Story mode offers an objective-based variant. Instead of tackling stages one after another, players travel between them on a world map, meaning you can replay them. That’s because levels have simple objectives such as avoiding damage throughout the mission or executing a type of attack a number of times. Completing quests rewards points that level up characters, unlocking new abilities (which are available by default in Arcade), or adding more health points and other stat buffs.

I appreciate how Story mode’s objectives incentivized me to observe stages for collectibles, hidden characters, and traps to use against enemies. I wish side missions had more variety than “bring an ally this batch of collectibles” though. Story mode may not be a colossal shake-up, but it’s a neat twist worth playing if you already conquered Arcade.

Teenage Mutant Ninja Turtles: Shredder’s Revenge gives me what I wanted: a polished, raucously fun throwback that plays better than how I remember the original games. Turtles fans new and old will find plenty to love, but those possessing a nostalgia for this era of the franchise are in for the biggest treat. Invite some friends, order a pizza, and prepare to relive your childhood in the best possible way.

A Note On Crossplay: At launch, Shredder’s Revenge only supports crossplay between PC (Steam and Windows) and Xbox. Tribute Games says it plans to introduce crossplay between consoles “further down the road.” Until then, PlayStation and Switch owners can only play TMNT with others on the same platform.